In 2019 Anna Boldt and Mathias Weinfurter realised the experimental research and artistic project Miradas Borrosas (Blurry Gazes) in the Colombian village of Ambalema. The starting point was the footage that the Google company had taken on site six years earlier for its online service Google Street View (GSV). So far, the residents had no knowledge of their existence and public accessibility. The village has no permanently installed internet access. After an extensive engagement with the inhabitants about the confrontation with the photographs, their experiences and impressions, a participatory intervention and a performance was realized on site. The interventions resulted in a film that was shown as part of a spatial installation.

During their residency at NIROX Foundation in December 2022 and January 2023, Anna Boldt and Mathias Weinfurter will continue the work to enable a comparison of  impressions. The chosen destination is the village Nietgedacht, 40 km from the centre of Johannesburg. The starting point are again the GSV photographs of the location which were taken in December 2014. For the artistic expression, on the other hand, they will deal with the site-specific conditions. In a free creative realization, a portrait of the respective place and its inhabitants will be created in relation to their representation online. The open character of the project allows for social choreographies.

For the realization of the project Anna Boldt and Mathias Weinfurter cooperate with the NIROX Foundation, whose headquarters and sculpture park are located on the UNESCO World Heritage Site Cradle of Humankind, only 22 km away from Nietgedacht. 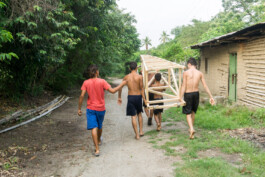