Centrum is excited to present the solo exhibition Collapsing Memories by Mathias Weinfurter.

Mathias Weinfurter’s work is characterized by an interest in monumentality and a meticulous study of formal and informal ways of remembering. For his exhibition at Centrum he presents an installation influenced by a series of current events shaping the public space and historical narrative of the city of Berlin.

In the past decades, an increasing social desire for representation and participation in decisions about the politics of remembrance can be observed. As various groups partake in the process of negotiating social identity, a disagreement arises between contemporary knowledge and symbolic monuments such as statues, buildings, street names, and others. In Berlin, for example, this concerned the renaming of May-Ayim-Ufer and Anton-Wilhelm-Amo-Straße or the demolition of the Palace of the Republic and the reconstruction of the Berlin City Palace.

These phenomena pose questions about the dynamic processes of shaping history, the linearity and solidity of the latter, as well as the undercurrents influencing the formation of the public landscape. A monument is thought of as something solid and everlasting; a legitimate and objective witness of historical facts. But is that really the case? Mathias Weinfurter invites us to think on the ephemerality of monuments, their relationship towards the structures of power, and the hidden layers below contemporary expressions of public memory.

Mathias Weinfurter (*1989) lives and works in Cologne. He studied art with a focus on sculpture at HfG Offenbach and Bezalel in Jerusalem (ISR). In recent years he has shown his work in exhibitions at BPA (Cologne), Bistro 21 (Leipzig), Salon Comunal (Bogotá, COL), POP;68 (Cologne) and participated in AiR programs in Jeju (KOR), Bogotá (COL) and Kramatorsk (UKR), among others. Among other things, he regularly organizes projects promoting international artistic encounters. In 2021 his work was honored with a grant by the Stiftung Kunstfonds. 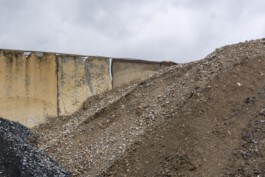