On my usual route, I walk past a twin wire mesh fence. It separates a tennis court from the public green space that I use. I can see the players through it, but I cannot change sides. Certain activities presuppose their enclosure and demarcation. Their “being-other” requires a contraption that marks them as such and makes them inaccessible to those who are not part of them – part of this sport, for example – and part of the institution that enables their practice. Thus, according to a first interpretation, it is not private property that is separated from the public realm; rather, it is the division of activities themselves that determines this separation. All activities that follow a contractual logic are separated from those that are performed by individuals on their own, contingently, as part of their everyday lives. If I wanted to enjoy playing tennis, I would have to master the technique by myself and become a member of a particular club by making a financial contribution. In other words, insofar as my playing activity is concerned, I would have to become institutionalized. The fence is the visible, institutionalizing power in this structure. It exercises power by separating two spaces. This is its social purpose.

Fences – if approached in another way – indicate that a piece of land has an owner. They describe the extension and route of a certain area by enclosing it. They are therefore the sensual-material marking of a property that both draws our attention and turns us away. In this way, they affirm a very old dualism: between an inert, unchanging, proprietary entity and a mobile, changing, non-proprietary entity. In other words, the dualism between property and elements that are free to move. As part of this manifestation, fences serve the function of halting movement in both directions – that is, preventing moving entities within the property from leaving the land in a disorderly fashion and hindering foreign entities from entering the property. When fulfilling this role, the twin wire mesh fence proves itself to be extremely reliable. It is used in a wide array of properties. This universal fence demonstrates the right of ownership, thus prohibition and physical defense. In contrast to a wall – which also offers “visual protection” in addition to demarcation, given that it is opaque and so does not reveal what is on the other side – the fence operates with a form of visibility that is both displayed and inaccessible. The other side is visible, but forbidden. Here we can make a comparison to visual art. Every image shows us “something,” but we have to make do with this something as an image. We cannot change sides. There is a long-distance effect that persists, a way of seeing; we are kept at arm’s length. Even if the picture belongs to a different state of being, whereas the fence always dissociates the same reality, the prohibition that both enact can still be comparable.

The installation Indices operates – at first – within this logic. There are more than 50 fences; they were filmed. We can see, in specific projection areas, the visible, permeable fence, what is in front of it and what is behind it. And then there is also an identical fence in the gallery space. It encloses the projection. Through it, we can see pictorial fences, through which, in turn, we can see a restricted territory. The real fence replicates the prohibition of the spaces depicted on film in their particular territorial authority, transposing this onto mechanisms of inclusion and exclusion in art spaces. For the viewer, the impossibility of crossing boundaries becomes an immediate experience of both space’s forms of exclusion and inclusion. As a viewer, I can neither reach the painting’s site nor enter the gallery space enclosed by the fence. A peculiar tension in the order of things becomes manifest. The link between image and reality established via an identical object – “here” in the art space, “there” in the photographs’ reality – forces the viewer to widely engage with the installation’s semantics and arrangement.

A fence has agency, the power that is particular to a thing (Ding-Macht). It separates two spaces, without leaving any gaps. This makes it part of an institutional structure. Within this structure, the fence is a particular matter that effectively makes systems stable. It is reminiscent of a very old principle, the principle of dividing acts into those that belong to individuals as identifiable and privileged parts of an institutional order and those that belong to a dispersed collective without institutional connection. In its (omni-)presence, the fence outlines how this spatial hierarchy’s hegemonic aspect can continue into the future.

That is the initial experience: the experience of a “total social fact” (Mauss), of a thing – a material, a fence – that acts and enacts subdivisions, inclusion, and exclusion. Still, the installation has a title, Indices. It first becomes elucidated through two interventions by Mathias Weinfurter that affect both fences, the real fence and the pictorial fence.

In a first intervention, the fence’s agency is undermined. Both in the gallery space’s “here-fence” and in the projection’s “there-fence,” posts have been removed, cut out; the resulting gaps are inconspicuous to the fleeting eye, but they signal a sensitive infringement of the disciplinary order. They interrupt the grid’s regularity. In the resulting empty space, a foothold, a support becomes able to present itself invitingly as a way of overcoming the fence and thus the boundary. Its power is broken; the other side of the fence is made accessible. A change in position – a “trespass,” a “damage to property” – has become conceivable.

A second intervention comes to counteract this first subversive act. At the same height as the fence, a mirror is integrated into the installation in such a way that its reflection suggests the grid to be perfect, normal, unscathed. Its image completes the broken grid in the imaginary of reflection, makes it look whole. The mirror provides the missing part to the original totality. This restoration of the grid’s order, thus of the boundary’s power, is a visual effect, a mirage that, on the one hand, reconciles, reassures those who desire the closure, the separation; on the other hand, it remains unsettling, since there is still the hope, the possibility of overcoming the limits set by the boundary. 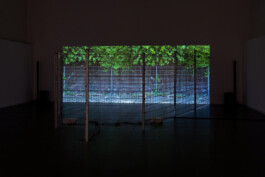 Mathias Weinfurter got the idea for this second intervention from rehabilitation mirror therapy. After amputations, a mirror is used to make the missing limb reappear as an image, thereby provoking the vision of an intact body, of all body parts, which can help with overcoming the trauma of the injury and eliminating the phantom pain. In the mirror, the body is complete once more. The steel body of the twin wire mesh fence also becomes intact again in its mirror image, allowing the viewer to reiterate the assertion of its being insurmountable. Even the projections of the fences are mirrored with an image processing software. They are digitally mirrored in such a way that we do not see the actual course of a particular fence. We only see one half, which is mirrored and continues flipped on the right side of the projection. This internal image mirroring becomes visible, discernible, in those moments when a car or a train moves past the fence. It enters the image on the left, for example, then disappears briefly, only to re-enter it on the right.

This unsettling visual experience – here of an “intact” real fence, there of equally “intact” pictorial fences, both the result of a paradoxical intervention with mirroring techniques – shifts the first total social fact, “fence,” into a play of traces, indices of appropriation, imagination, self-deception, and self-assertion whose meaning oscillates. In other words, it is a play of heteroclite spaces of possibility. Both spaces now start to vibrate. The collective bursts into the individual; the individual proliferates into the collective.