What does it mean when the place where one lives and grew up just disappears? The residents of Manheim (North Rhine-Westphalia) are making this experience since 2011. In the course of the lignite mining in the Hambach opencast mine, their village had to be relocated to Manheim-neu, which was built in 2012. Manheim is just one of many places in the Rhenish Lignite Mining Area that suffered this fate. The artists Max Brück and Mathias Weinfurter take it as an opportunity for an artistic investigation of the relationship between culture, memory and identity.

In the course of their preparation for the exhibition Offenbach-neu, the artists visited both the almost completely disappeared village of Manheim as well as the relocated Manheim-neu. Objects collected on site, quotes which refer to their places of origin, are now being processed in an installation specifically designed for the exhibition Offenbach-neu. They also spoke to local residents and captured their impressions in photographies and video recordings, which can be seen in an accompanying exhibition brochure.

With their new work, Brück and Weinfurter are also referring to the site-specific developments in the Offenbach harbor area, on which the Kressmann-Halle is located and the new building for the Hochschule für Gestaltung is planned. A place with which both sculptors associate personal memories. Two narratives of loss and renewal thus converge in the exhibition. 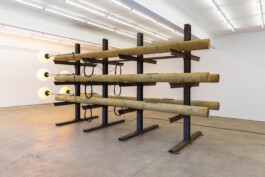 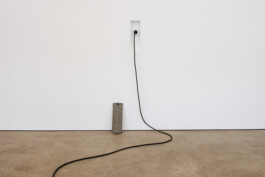