The work Philotas is an examination of the contradictoriness of German patriotism. It tries to make this ambivalence perceptible by a banner, as they are known from sport stadiums, but have also been used to demonstrate the power of military or state. In addition to the demonstration of unity, the mechanism of such choreographies also contribute to establishing the identity of the participants.

The work is named after a piece written by Lessing in 1759 in which the protagonist Philotas dies as a martyr for his fatherland. Lessing firmly rejected this attitude. He chose a rhetoric which has been used and is still in use over the last 100 years. Be it in war memorials as a remain of the two world wars, during the German reunification, to the men’s football World Cup 2006 or in connection with folkish nationalist movements.

The demand for a “healthy patriotism” has been discussed for years. The spatial installation asks the question of whether something like this can exist. 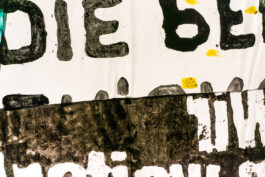 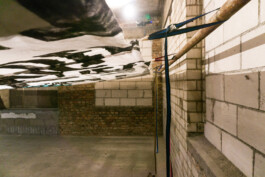 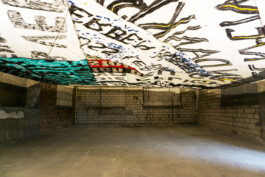