Mathias Weinfurter borrows the title of his series of works P.P. from an everyday symbol of Italian-speaking areas. The abbreviation P.P. (proprietà privata) can be found on curbs, monuments, walls, gates and facades. Although P.P. does not refer to the initials of one specific person, it emphatically designates the property claims of individuals. Because, written out, P.P. unmistakably indicates private property. Similar to a nameplate on the cover of a book or on the door of an apartment, the stamp-like marking of space depries it of its common, i.e. public use. The symbolic pinning of a plaque, the set up of a sign, or the sealing off of areas with bars and chains, are synonymous with categorically criminalizing warnings to the unauthorized use of places marked as private - despite the type of their use. Markings in spatial surroundings are not singularly conveyed in written form: often they are in the form of design. The design could be just subtle gestures that only reveal the repressive character of their surroundings upon closer analysis. It should also be noted that the violence of  P.P. style places often cannot merely be determined by their design. It should rather be sought in the discrepancy between the design of a publicly declared domain and a privately declared domain. The physical barriers or borders, can often be deceitful in their message. The barriers often appear hypocritically neutral, almost as if they had to keep their blockade function a secret.

Spatial markings can be as subtle as chains and fences. Their filigree metal ramifications and eyelets may be “just metal”, however they materialize as physical interventions in space. The evaluation of spatial markings becomes even more difficult when they are completely dematerialized existing as mental constructs that nevertheless adhere to the existing order, and participate in it. Mental constructs seem as if the actual is always only the known, hardly the possible, always rigid and hardly fluid. Space, in its general category as the physical reality surrounding us, therefore has a significant role in the creation and retraction of freedom. Weinfurter's aesthetic examination in his series of works P.P., inspects the tension between space, its restriction and its appropriation. Starting with the realization that space does exist as a form of private property, the artist subjects this status of ownership, which is measured as fragile, in constant critical scrutiny. Playfully, Weinfurter repeatedly poses the question of the validity and legitimacy of the boundaries of public and publicly accessible spaces, while referring throughout to the variable, even ephemeral aspect of spatiality. 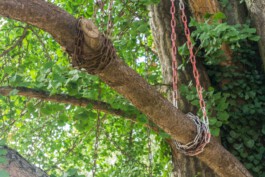 The focal point of his practice, however, is not the taking of private property, such as the removal of chains, but the “as if”. Weinfurter moves barriers into new contexts that make them obsolete according to their former use. In doing so, he not only deprives the chains of their original function, but also addresses the redundancy of their fundamental meaning. The work P.P., conceived as a series of installations, has been developed by the artist since 2017 and revised ever since. Weinfurter thereby continues the processuality of his works both on the level of content and form. If, for example, his installation in the Opelvillen Rüsselsheim from 2018 still shows its close reference to public spaces with the examination of chains as barriers, his constructions from 2019, which were shown mostly in white cubes, abstract the function of the chain, not because of the different exhibition situation, but in synergy to their form and materiality. In a way, one could say that his outdoor works and those in closed spaces develop two different tendencies from the same premise. The chains that the artist installs outdoors, seek to establish a connection with nature. By gently wrapping them in trees, Weinfurter reveals the fetish character attached to the chain. In the public space, it seems to fit into its surroundings without violence as a supposedly natural element of an urban infrastructure. It is not questioned why the chain - as a barrier - holds its unchallenged place within the social structure, nor are its conditions of production reflected upon – an industrial product artificially created – and, according to the idea, human-made. No matter how rational the chain may seem, it only attains meaning through its ideological setting. The exaggeration that Weinfurter works with is quite humorous. Mostly the chains in his works are taken from the publicly accessible spaces. It is the barriers to entrances, courtyards and pathways that block off spatial permeability and freedom of movement in these spaces. Weinfurter hereby symbolically frees the space from its chain, reevaluates it, and designs new proposals for its use. Mathias Weinfurter comments on his practice: "Anyone can hang anything in a public space, but it is up to the creatives to take that something away again and redesign it." Nevertheless, he is less concerned with actual expropriation than with the question of property claims and the possibilities of spatial redistribution. In this way, the artist operates in a field of discourse that corresponds closely with current social hegemonial structures.

The playful strategy of un- or re-purposing public objects naively, but above all hopefully asks about the political function of exclusion. In fact, one would like to ask what damage would be done to space if it were not used exclusively – the arguments would be made with abrasion, vandalism, and other phantasms that deny access to all those who would supposedly want to participate in such spaces unjustly. The literal and metaphorical commentary of spatial distribution connects to an amount of pressing issues: expropriation efforts, migration policies, violations of fundamental rights. Space is a category to fight over in today's political landscape. For about a decade now, critical theorists in architecture, geography, and urban planning have subsumed the concept of hostile architecture to include not only decidedly infrastructural exclusion, but also defensive design elements of spaces declared as public (and yet closed off).1 Empty spaces and gaps in underpasses are provided with spikes that make it impossible to find shelter in them.2 Cold, metal benches in urban parks are by no means inviting to rest, as they are strictly divided into individual seats and thus prevent lying on them. Urban space is hardly characterized by the presence of the commandment; on the contrary, at almost every corner one finds the most diverse exhortations as to what actions are to be refrained from, what is not permitted, and ultimately what consequences the non-observance of these rules entails. It even seems as if every little piece of space that has the potential to form free space (or a space of freedom) is intentionally stripped of its hypothetical function. Such repressive architectures extend over most of the public space. Even Foucault's analysis of centralized authority, which found its architectural peak in the panopticon, is no longer limited to prisons and administrative complexes of the state apparatus3, but continues deviously in the construction of residential architecture. Large-scale housing estates, with courtyards centered inside the complexes, do not arbitrarily resemble penal institutions. Architecture, especially public architecture, is always an expression of the political agenda of those in power in their time. Even what is discussed under the concept of (urban) security4 and across state borders, is by no means free of conflict. Urban planning exemplifies a dialectic of exclusion that propagates protection but relies on the fear of defenselessness, and speculative mistrust in a precarious crisis society. Security, many government leaders agree, can only be guaranteed through total surveillance.5 The restrictions on freedom that accompany such surveillance societies6, should not to be perceived as a burden but as a compromise. Surveillance society is in favor of individual security for the privileged, but not for the protection of society as a whole. The question of the use of space thus fits into the capitalist logic of exploitation that is characteristic for contemporary societies.

So, even if Weinfurter's net-like chain objects at first glance appear to be formalist aestheticizations of the snatched goods, that boldly undermine function in their production aesthetics, they also convey through form the tragic essence of repressive infrastructures. Weinfurter's expansive constructions are often dominant in their effect, even daunting. Even though the artist invites the audience to cross the aesthetic boundary. Thus, the haptic aspect, such as touching, is laid out as a participatory moment in the works. The vanishing distance between the work and the viewers thus idealistically thematizes and mirrors what is taken away through privatization and is finally reclaimed through the artistic staging. In Weinfurter's works, the motif of the chain crystallizes into an ambivalence that limits and at the same time enables passage. While the art object is suitable for leaning against during taking a selfie in the gallery space, it is not at all comfortable. For the chain remains the symbolic blockage not intended for use.

And yet the cold, heavy metal, sharp-edged by the bolt cutter and with a patina of weathering, so finely chained together, has yet another completely different part to it. Especially so, when the artist sets his chains in motion. Weinfurter's works float above the ground, slowly settle down and expand on the floor. A weight one would not want to lie under, and yet they seem so supple. Weinfurter occupies the objects with new meaning: emptied of and liberated from their function, they become an objet trouvé, which for the sake of its own sphere, as art, has an existence apart from the social and yet refers to the conditions, the history of its production. For the material appropriation of the work of art follows other principles than those of society. While Weinfurter's chains may seem hostile and archaic at first, they take on a contrary character through the context of their exposure and the change of perspective. They are reclaimed and reinterpreted. As an exaggeration of social phenomena, Weinfurter's art offers itself not as a solution but as a contribution to the discussion. In this sense, one could not only read his minimalist sculptural works as an offer but connect them to the most famous quote of left-theoretical history: "The proletarians have nothing [...] to lose but their chains. They have a world to gain."

3 Referring to Michel Foucault's Discipline and Punish: The Birth of the Prison (1975).

6 The term surveillance society refers to forms of society that are particularly characterized by surveillance. This can be, for example, by wide spread video recording, but also by other mechanisms of surveillance, such as the social control of citizens among themselves and by the state, the storage of personal data or the use of facial recognition software in public places. See exemplary the recently published anthology: Zappe, Florian; Gross, Andrew S. (Eds.): Surveillance, Society, Culture, Berlin, 2020.